image: fantasticfiction.com
An anonymous review of James Patterson's Zoo:
I was very excited to sit down and read a James Patterson book. This book was not like reading a Patterson book. The only thing it had in common was short chapters. There was no suspense, no surprises and it was very dull. Had I known it was a doomsday book, I would not have wasted my time. Real life can get you down, a good book can take you away for a little while. Release Date: September 3, 2012

Customer Kris M. recommends:
I just finished "Blind Devotion" by Sharlene Prinsen. The book was very intense and brought tears to my eyes many times as I read this heartbreaking story about PTSD and drug addiction. I feel it is very well written. The subject matter is depressing, especially knowing it's a true account. Given that the US is still very involved in Iraq and Afghanistan, I'm sure many people will buy it and be able to relate to it. Besides telling a story, the book also offers advice and lists resources available to help victims of PTSD. I have two nephews in the Army and both have served in Iraq (twice), one in Afghanistan and also in Korea (twice). They've been away from family for one-year tours each time they were deploysed (with an R&R break) and have both missed the birth of their children. It's not an easy life and it's understandable how our military men and women can develop this disorder and how it can affect an entire family. This book will raise awareness to a new level, I'm sure. Release Date: September 25, 2012

Two recommendations from customer Michael S.:
The Shadow Girls by Henning Mankell - Strange but oddly compelling. Manages to be both humorous and tragic. Release Date: October 16, 2012

The Devil's Causeway by Matthew Westfall - Interesting chronology of a period not regularly covered. The maps and pictures add to the overall impression of a well researched book. Very enjoyable. Release Date: September 18, 2012

Mary H. recommends The Renditions by Albert Ashforth:
A fast read full of excitement and suspense during the Kosovo era. A true knowledge of special ops is established as well as Alex Klear's coolness under fire. It shows the full meaning of "Keep your enemies close and your friends closer." I enjoyed the book, reading it in one sitting. I will read anything he writes in the future as he has peaked my imagination. Release Date: October 2, 2012 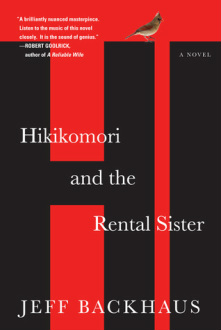 image from goodreads.com
Todd A. recommends Jeff Backhaus' "Hikikomori & The Rental Sister":
This is a first novel by Heff, and his voice is already fully realized. The characters live on the page, and the subject was new to me. Hikikomori is a condition where someone has a taumatic event in their life and they become a shut in, refusing or unable to interact with the people and world around them.

In this novel, Tomas Tessler experiences such an event, and when we meet him he has been in his room for three years. He goes out occaisionally in the early hours of the morning to buy groceries. Though Thomas is married to and lives with Silke, he doesn't interact with her.

Silke, while haveing experienced the same trauma as Thomas, still loves him and wants him back in her life, but she is at the end of her rope. As a final act of desperate hope, she hires Megumi as a rental sister. In Japan, a rental sister is someone who does whatever she needs to do to return someone from the abyss they are locked in.

Megumi has experience with Hikikomore as her brother was once gripped by it form events in his own life.

The book is a headlong rush of relationships between these three characters and you fall in love with them each in their own way. As all stories have favorite characters, we root for Megumi and her eventual love for Thomas, but Silke is the hero of this book, giving more than anyone could possibly be asked to give to save her husband, no matter what the cost to herself. Once I started this book, I could not put it down until I knew what was going to happen to these three fascinating characters.

I highly recommend this and have been vague in the description of the story, as you'll what to find out what transpires for yourself. Release Date: January 2013 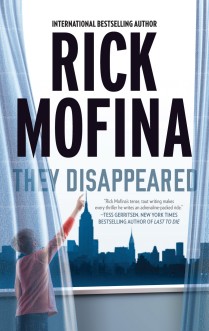 image from rickmofina.com
Booktrader customer Cathy S. recommends two books:
"They Disappeared" by Rick Mofina: I also enjoyed this book, but I have somewhat mixed feelings about it. I can't put my finger on why I have a few concerns about this book..perhaps because I frequently travel to NY and it seems a bit unbelievable that the mother and child would be abducted in broad daylight in the heart of Times Square without anyone seeming to notice or care. I was also disturbed/unconvinced by a key point to the story very early on...the boy is 9 years old...he finds this toy airplane in the backpack that he knows is not his. Once his father makes arrangements to go switch the backpack with the correct owner, the boy doesn't think to return the airplane to the backpack...he leaves it in the hotel room where he had been playing with it?? And neither parent notices this? Maybe if the kid had been 3 or 4 or 5, that would seem believable, but not so much when the kid is 9. And then especially when he and his father meet up with the true owner of the backpack who specifically grills them about making sure everything was returned to the backpack? The author's use of short chapters made for very quick reading. Of course, I was genuinely rooting for the mother and son to be rescued unharmed, but it did seem a bit unbelievable how it was all resolved. Not that it didn't make for some nice reading...just not the type that digs deep and stays with you. More the type that has you saying, "that just isn't possible." The author's style of writing was good, and I would probably choose another of his books to read. Release Date: September 18, 2012

"Frozen" by Mary Casanova: I very much enjoyed this book. I actually read it entirely in one day (almost 250 pages). I enjoyed the author's style of writing, her descriptions of people and places. I found the story believable and easy to follow. I was sympathetic to the main character, "Sadie Rose," who was written to be very likable. The story was resolved in a believable manner - no cop-outs used. The transition back and forth between real time and the main character's childhood memories pushed the story along. I applauded the main character in the end when she found the courage to speak up and finally make her wishes/demands known. I would definitely reach for other books written by this author. Release Date: August 15, 2012


Angie C.:I liked Heart of Steel by Jennifer Probst. Nice light read. I would read other books by this author.
Now Available

Danielle H. recommends Alexis Harrington’s Home by Morning: I originally picked this book out for my daughter but decided to read a couple of pages and was hooked.  I absolutely loved this book!  I couldn’t put it down, I finished it in 4 days which is unheard of for me because I work so much.  It was a love story with a couple of twists, historicaly accurate and painted a colorful picture of it’s place in U.S. history.  This is the first book I’ve read written by Alexis Harrington and would love to read another book written by her.
Available now.

Customer Mary H. recommends Jonestown by Leigh Fondakowski: A hard read because of the detailed information contained. A must read because of the subject matter. An eye opener as well as a heart breaker. The author successfully pulled the information from the survivors, gleaned it into a gripping manuscript so you felt you were a member of the People's movement. It's not a fast, nor easy, read, but I couldn't stop at any place or quit. I would have paid to see the play. Release Date: October 12, 2012

A review from customer Kathy Watson:
I just finished reading "The Healing Power of Reiki" and I did like this book. It was a basic book of what reiki is and how the author, Raven Keyes, a reiki master, utilizes it. In this book, she shared her experiences as a practitioner of the art and the results of it on her clients. As I did not know very much about reiki, I found this book to be informative and interesting and also well written and organized. Release Date: October 8, 2012